West Japan Railway Company and the Setonaikaikisen Group are pleased to announce their plans to operate the SEA SPICA, a superbly innovative sightseeing cruiser, again in 2022. This vessel was exclusively developed with the vision of showcasing truly spectacular views of the numerous islands lying within the Seto Inland Sea. It has been engineered to ensure lasting memories and satisfaction to greater numbers of passengers, as they make the rounds of the lovely islands for which this area is famed.

Spica is the brightest star in the constellation Virgo. With its pale blue shine, it is one of the brightest stars that form the Spring Triangle asterism. Named after the star that shines brightly over Setouchi's blue ocean, the cruiser takes passengers on a freeing journey. This is the new Setouchi highspeed sightseeing cruiser. 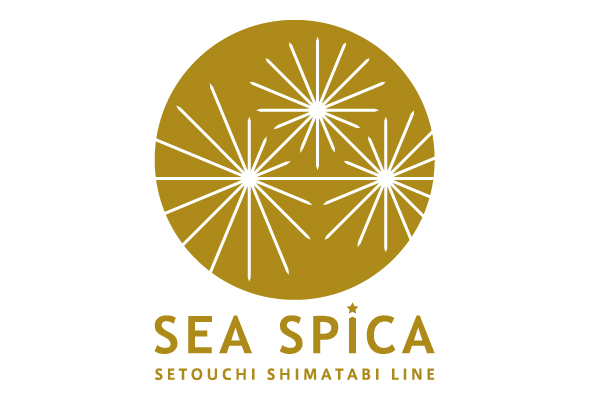 The distinctive logo combines the image of “Spica” (literally, “Pearl Star”), a key component of the Spring Triangle star cluster within the Virgo constellation, and the route linking isles along the Seto Inland Sea. It is also origin of the “SEA SPICA” cruiser name.

Contrary to existing highspeed cruisers, SEA SPICA's interior features custom sofa style seating with tables and drink holders at each seat. Window seat pairings are slightly angled towards the window, and have low backrests to offer unobstructed views of the ocean. 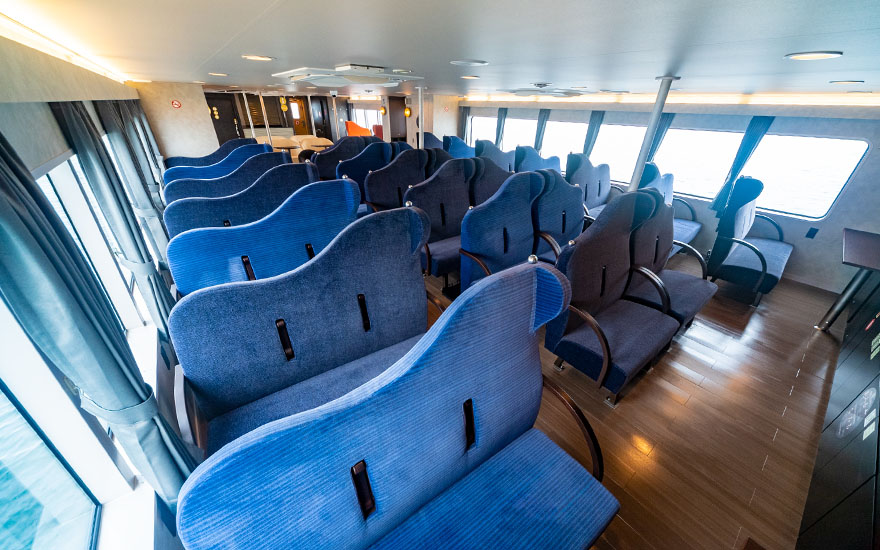 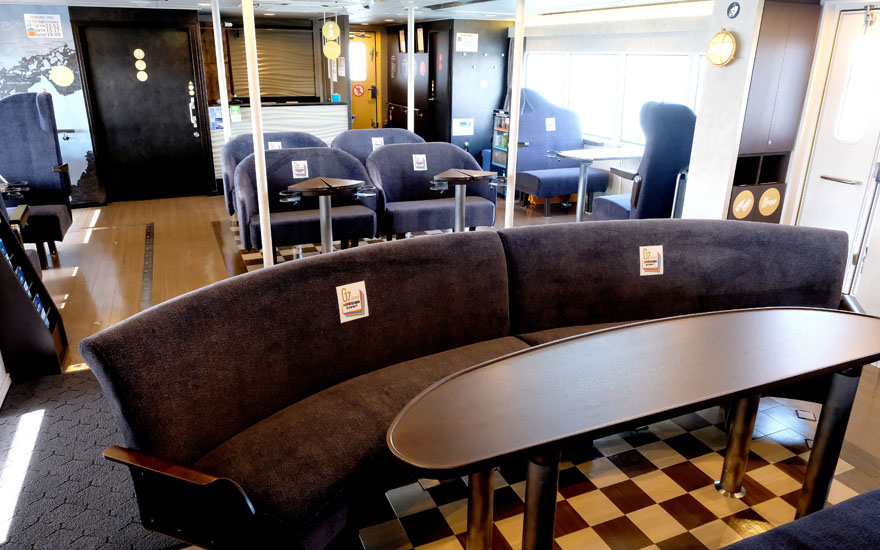 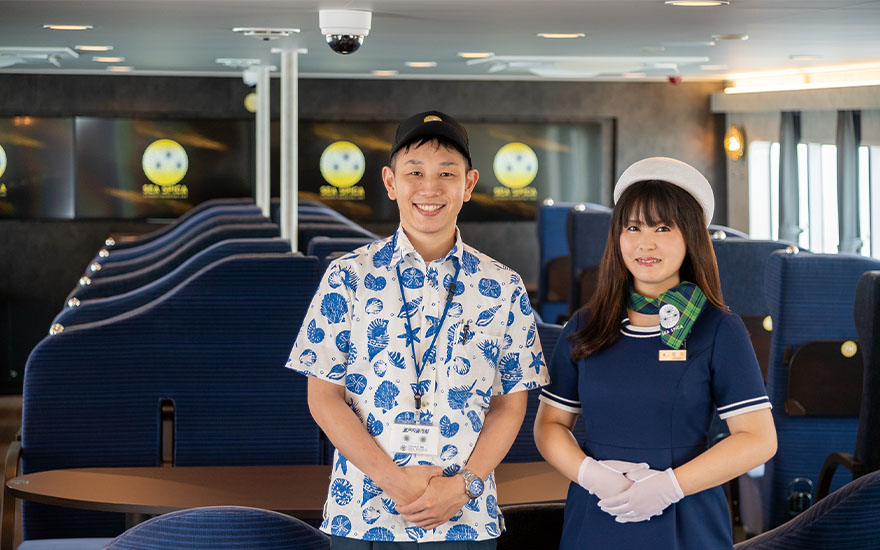 * Photographs are for illustrative purposes, and may vary from the actual design.

● The four-screen multiple display installed at the front of the lower-deck cabin projects images from the upper-deck pilothouse, ensuring passengers the identical view as the captain.
● This combination monitor also profiles the history, charisma and other aspects of sightseeing stops and scenic viewpoints along the way, further fueling passenger interest and anticipation.
● An onboard concierge fully versed in the Seto Inland Sea provides explanations of the history and appeal of the islands. This special service enriches visual appreciation of the cruise with detailed descriptions of Setouchi enchantments.

The upper-deck “SPICA TERRASSE” features sofas crafted in the image of the Setouchi island chain, along with counter-style tables. These appointments ensure optimum and unobstructed views of the exhilarating Seto Inland Sea scenery. The barrier-free design includes an elevator for ready access from the lower level for mobility challenged passengers. 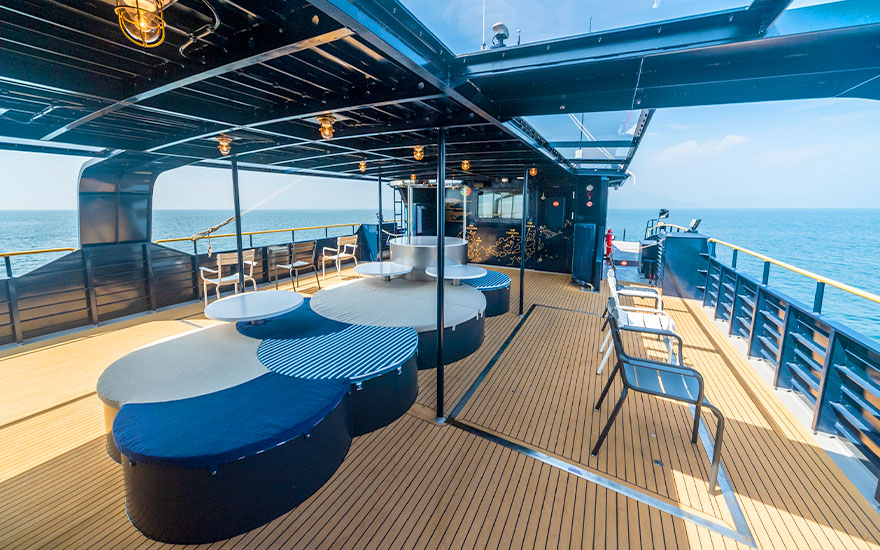 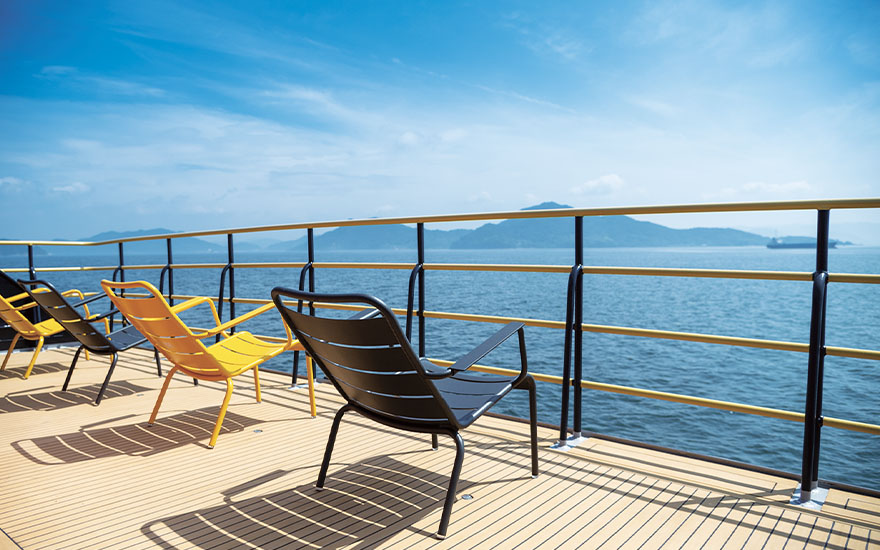 * Photographs are for illustrative purposes, and may vary from the actual design. 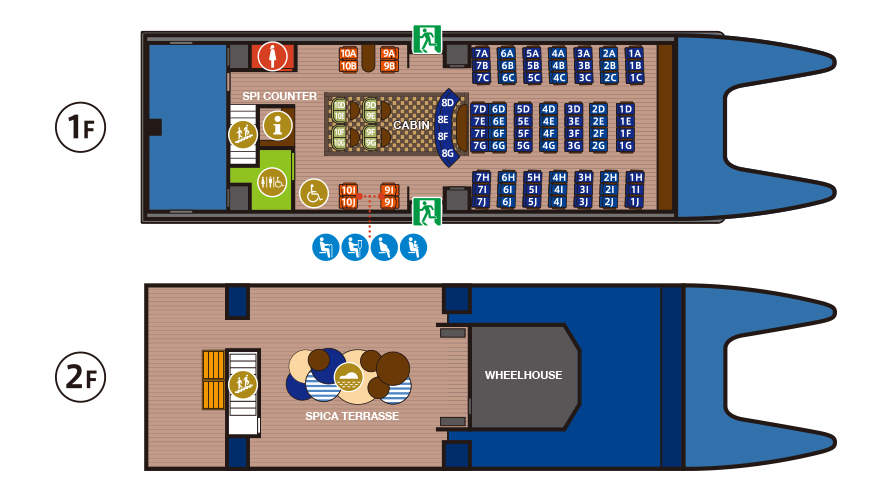 ●The cruiser's capacity of 90 passengers is equivalent to two buses, making it the perfect option for charter tours operated by travel agencies.
●The cruiser is equipped with Wi-Fi and AC adapters, high-quality sound and resolution digital signage boards for foreign visitors, as well as a souvenir stand.
● Added conveniences include a multipurpose restroom with diaper change station, exclusive ladies’ restroom, direct elevator to the upper deck and other amenities to further enhance passenger comfort on Seto Inland Sea cruises. 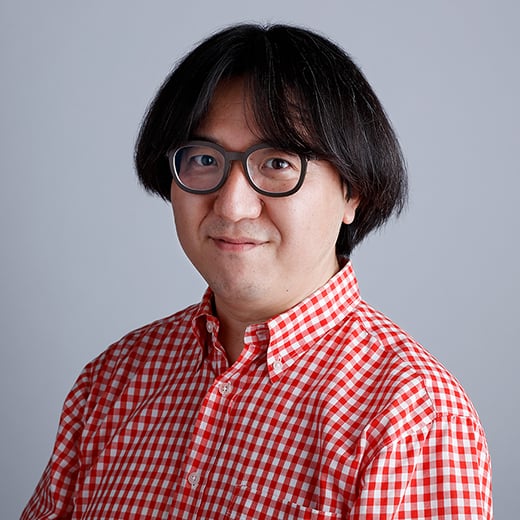 Architect and Designer. President, Ichibansen.
Born in Nara Prefecture in 1976, Kawanishi founded ICHIBANSEN/next stations co., ltd in 2014. He is the recipient of numerous awards including The Renovation for Nakamura Station Tosa Kuroshio Railway, and the Echigo Tokimeki Railway Setsugekka awards. Kawanishi is also responsible for the design of the WEST EXPRESS GINGA train, launching in Spring 2020. 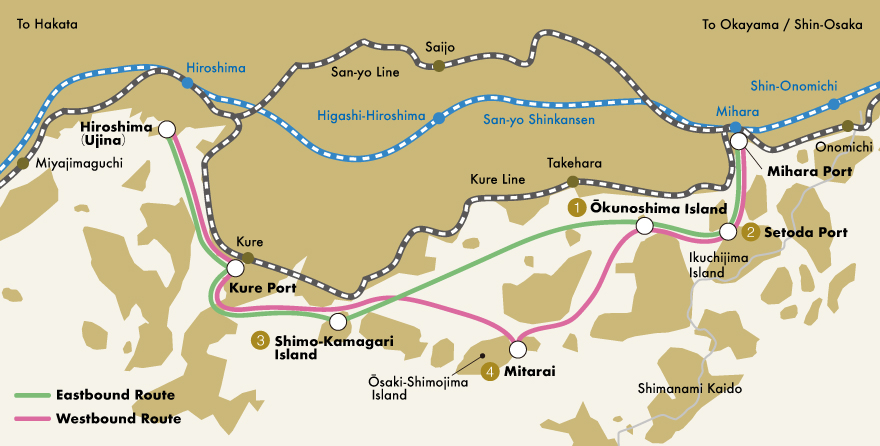 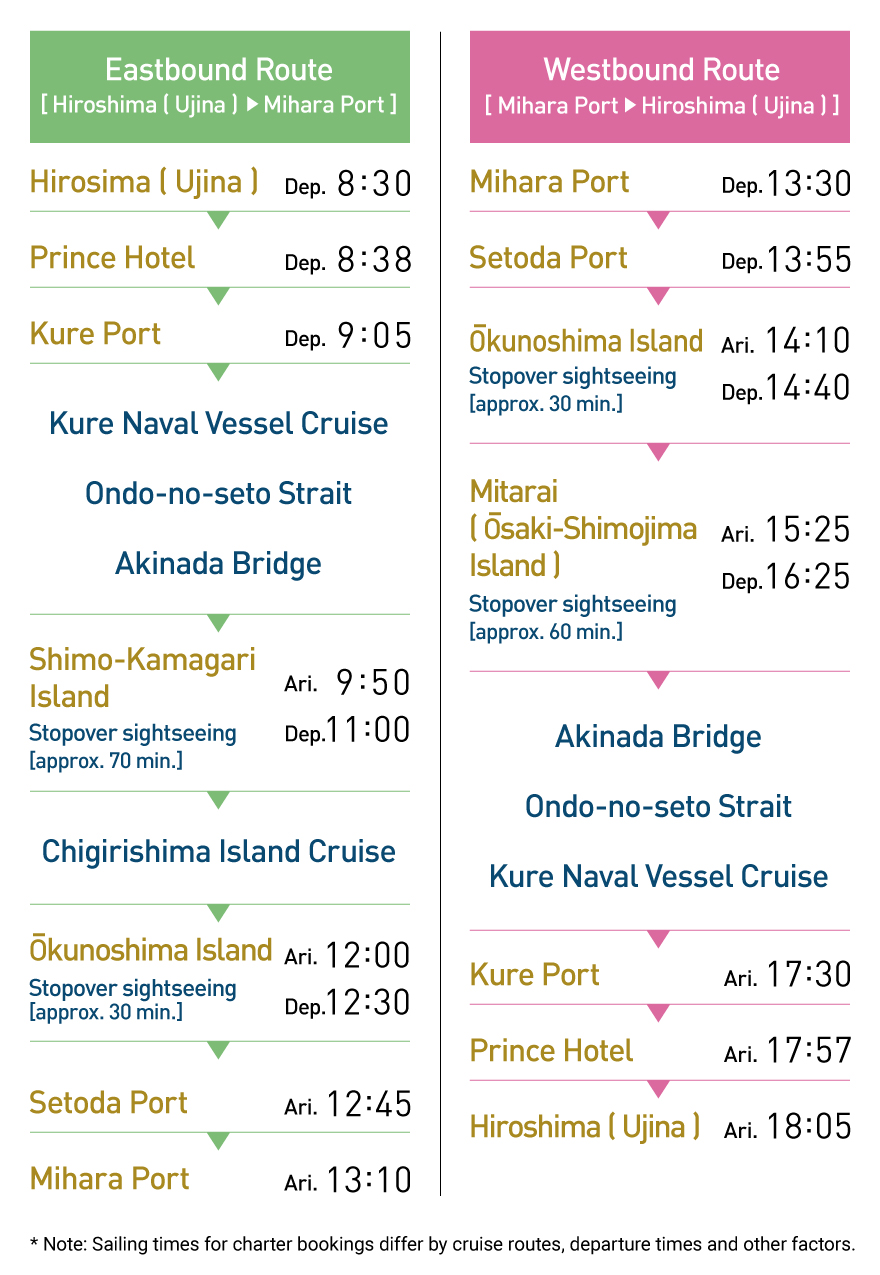 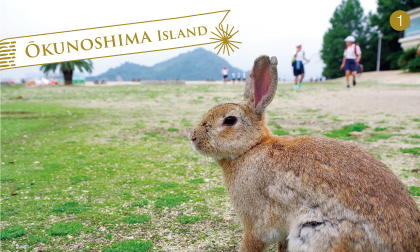 Ōkunoshima Island enjoys special fame as the “Rabbit Island” of Setouchi. True to that nickname, over 900 rabbits are estimated to inhabit the isle, and can be encountered in most all areas. In the past a poison gas plant was operated here, with the government deleting the island from all published maps. Traces of those days remain, fostering a unique and thought-provoking atmosphere. 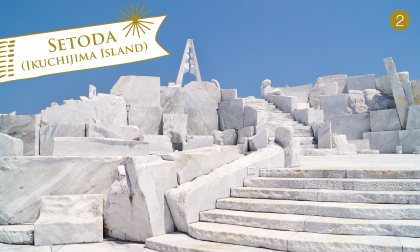 Ikuchijima Island lies near the center of the Shimanami Sea Route. Famed for lemons (said to have originated Japan’s domestic lemon growing), lemon farms flourish throughout the island. Kosanji Temple (also known as the “Nikko of Western Japan”) features the “Hill of Hope” pure white marble garden. Bicycles may be rented, with the route linking Ikuchijima and Ōmishima islands crossing ”Tatara Bridge” midway (the borderline between Hiroshima and Ehime prefectures) popular among cyclists. 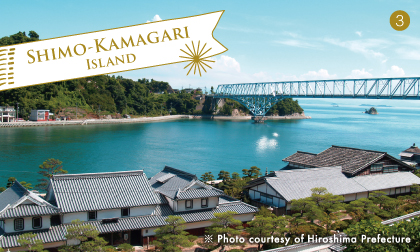 Shimo-Kamagari Island is the first island along Tobishima Sea Route in the Sea of Aki. Several centuries ago, the isle served as the gateway for the local feudal clan in providing a warm welcome to Korean envoys to Japan. Documents attesting to this visit (appearing in the UNESCO Memory of the World Register) are stored at a museum in Shotoen Park. Among the other antique structures here, visitors may enjoy a cup of tasty green tea at Hakusetsuro, a former school with a magnificent view of the tranquil Seto Island Sea. 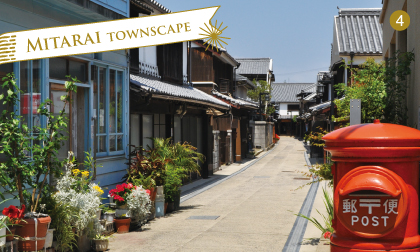 Scene from Mitarai, located on Ōsaki-Shimojima Island – the fourth island along Tobishima Sea Route in the Sea of Aki. This port town retains clear vestiges of the Edo Period, when vessels waited here for favorable winds and tides. There are stores of various sizes, teahouses, shrines, a seawall and other structures dating from that era. From the Hill Overlooking History Park, a site rich in historical ambience, photos can capture an impressive range of the scenic islands of Setouchi Inland Sea below. There is also a traditional inn and boathouse later renovated as a cafe, offering leisurely passage of “island time” at its finest.

April 1 (Friday) ~ December 5 (Monday), 2022: Operation on Mondays, Fridays, Saturdays, Sundays and national holidays
(No voyages are scheduled May 3 (Tuesday, national holiday), May 6 (Friday), and from July 1(Friday) to July 11 (Monday). Please also be aware that there are certain other dates when no service is available) 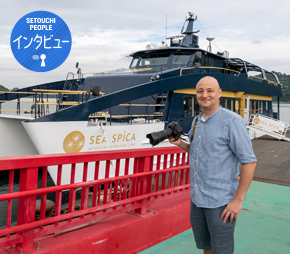 Speaking with Photographer/
Writer Tom Miyagawa Coulton
Mitarai, its appeal,
and the revitalization of
the local community