A report on the shipbuilding
of “SEA SPICA”
vol.3 by members of STU48
The merging of the superstructure and the base

“SEA SPICA” is a high-speed sightseeing cruiser, and the “West Japan Railway Group” and “Setonaikai Kisen Group” are developing this special ship together.
This is the third report on the shipbuilding of it.
Our first report was about the first-rate process of building the ship body with an aluminum alloy, and we talked about the “reversal procedure” done during the shipbuilding in the second report.
In this third report, the entire structure of the ship is emerging in front of us, and we introduce you to the process of putting the superstructure, which will be the passengers’ cabin, on the base – which was turned over in the last report.
2 members of STU48, Hina Iwata and Marina Otani are our reporters today.
An idol group based in Setouchi area, STU48 is the official ambassador of the “SEA SPICA.”

Putting the superstructure (which will become the cabin) on the hull, the base of the ship

This is the part which will become the passengers’ cabin and is called the “superstructure” at shipyards. It is made of aluminum alloy just the same as the base, or the “hull.”
This section is obviously a huge box with a length of 20 meters and width of 7 meters, andit is easy to imagine that this will be a cabin because it already has a long window which stretches along the side, as well as an entrance.
Today’s operation is attaching this part to the hull.

There are regular patterns on the surface of the superstructure, and they are marks made after shaving slight roughness off (which had been made during the shipbuilding process). The solid aluminum is shining beautifully, as if it is pure silver. Also, it seems like some sort of animal if we look at it from a distance.

The craftsmanship stands out! The union of the aluminum alloy ship hull and the superstructure.

Now, the operation starts…! We were a little bit nervous, but the crane lifted the superstructure up very easily and moved it above the hull. Mr. Shintaro Kawaguchi, the sales director of “Setouchi Craft Co., Ltd.,” which engages the shipbuilding of SEA SPICA, told us that this part weighs only 2 tons. A common automobile weighs about 1 to 1.5 tons, so it is surprising to us that this large structure is so light when compared to a car. This is because of the material, aluminum alloy.

The next process is where the shipyard shows you its great skill. To fix the superstructure to the right position exactly, the staff had to keep doing so many fine adjustments in advance of the final attachment – lowering it onto the hull, and lifting it up again to process their measurements. At the end of the procedure, some workers do the final modification in millimetres. This technique is possible because the structure is light. Finally, the slight gap between the hull and superstructure is welded, and this process is done.

Let’s introduce you to the passengers’ cabin in “SEA SPICA.”

We are allowed a special chance to go inside of the superstructure. It is very spacious, and we still can see additional reinforcement on its wall and ceiling. This is actually a shiny silver world, just beautiful…!

“The hull is made of thin aluminum plates,” a staff member, Mr. Ikeuchi told us. “Its thickness is only 2-4 millimeters, therefore, we put these ribs (reinforcement) to avoid distortion.”

There is a big long window on the side. You can see the beautiful scenery of the Seto Inland Sea from this window after this cruiser enters service in the summer…! As you see, there are so many ribs for reinforcement around the window, as if for an unthankful task.

This is an image of the finished interior of SEA SPICA. These seats are custom-made. This is a very slight difference, but the seats near the window will be angled 3 degrees to face the outside. It allows the people who sit in these seats to see the outside view easier than normal.

The cabin on the stern has a more luxurious atmosphere. It seems like a lounge of a high-class hotel…!


This is a view of the interior of the cabin. The far end in the photo is the head side, where seats will be placed, and the foreground is the stern side, which will become a lounge. The wall in front will have a big display, and the big holes on both sides on the floor are for the engine heads.

Ms. Iwata and Ms. Otani from STU48, how did you enjoy this tour today?
“It was a very exciting experience for me,” Ms. Iwata said, “because it is usually impossible for us to see the inside of the walls. It is also interesting for me to learn how an engine bed, windows and so on, are created. I am looking forward to the process and completion of the shipbuilding step by step from now on.”
Ms. Otani’s eyes are shining, “I realized that the ship is created by the hands of real people from the beginning, because I could see the shiny metal surface on the outside of hull without any painting at all. Also, it was so surprising that the huge superstructure was lifted so easily and attached in a short time.”

Please wait for the next report, vol.4! 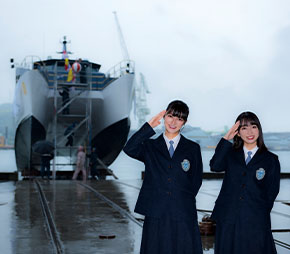