“Workation” – the concept of blending on and off time into a “working vacation.” Favored destinations focus on spots away from city centers, soothing for the body and mind amidst breathtaking natural settings. In this report, we turn to veteran Japanese lady travel influencer “Ayumi” for some expert advice on how to relish a full-fledged “Setouchi Workation.” Recommended as an appealing basecamp is the Grand Princes Hotel Hiroshima, with Ayumi participating in this travel package for your reference. Showcased here is a three-day/two-night travel model in the Setonaikai (Seto Inland Sea) National Park area. Combining a tranquil hotel stay, Hiroshima City sightseeing, communing with nature, an ocean cruise around the local islands and other distinctive pleasures.

The Grand Prince Hotel Hiroshima stands at the southern tip of the Motoujina area in Setonaikai National Park. A splendid choice to forget the hustle and bustle of the city, truly easing back while strolling through rich green primeval forests, along seaside trails and taking other scenic routes. The hotel offers guestrooms with expansive views of the Seto Inland Sea, a plush lounge, impressively appointed hot springs, fitness club, swimming pool and other amenities perfect for the workation genre. Fully equipped with Wi-Fi for your on-site work needs. The SEA SPICA, a vessel for cruises around the inland sea, as well as ferries to Miyajima Island also depart and arrive at the pier in front of the hotel. An ideal base for launching further trips around this lovely area. 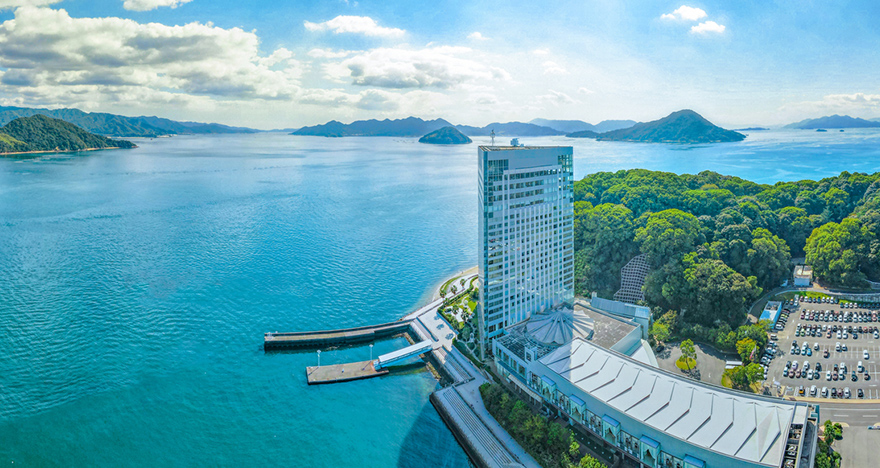 Motoujina, a small island connected by land to the southern tip of Hiroshima City, occupies one corner of Setonaikai National Park. Japan’s very first official national park, contains primeval forest and otherwise furnishes a rich natural setting for both locals and visitors to fully relax and enjoy. Recreational opportunities include seaside strolls, fishing, cycling, hikes on nature trails through the ancient woodland growth and other pleasures. The Ujina district was converted to host a port for Hiroshima – which flourished as a military-based city prior to World War II. The area along the harbor has been developed as a park, and today bustles with rows of interior goods shops, cafes and other fashionable spots. 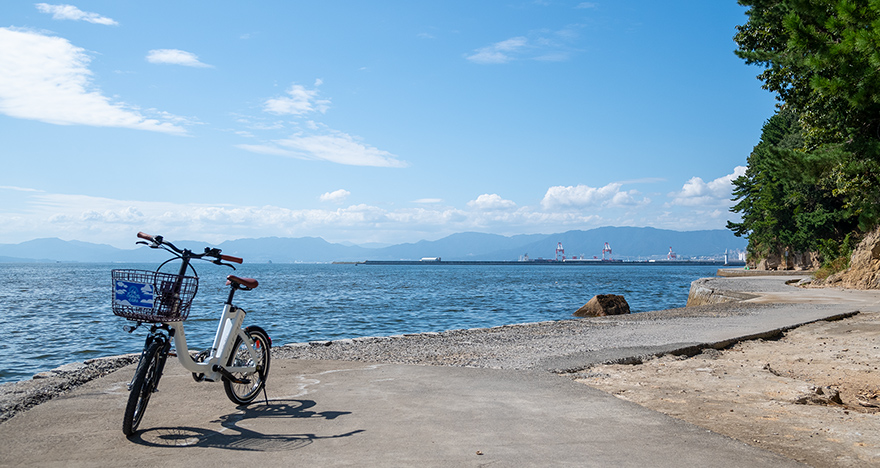 Ayumi departs by Shinkansen (bullet train) in the morning,
arriving at Hiroshima Station before noon. She then moves to the Grand Prince Hotel Hiroshima by courtesy shuttle bus. 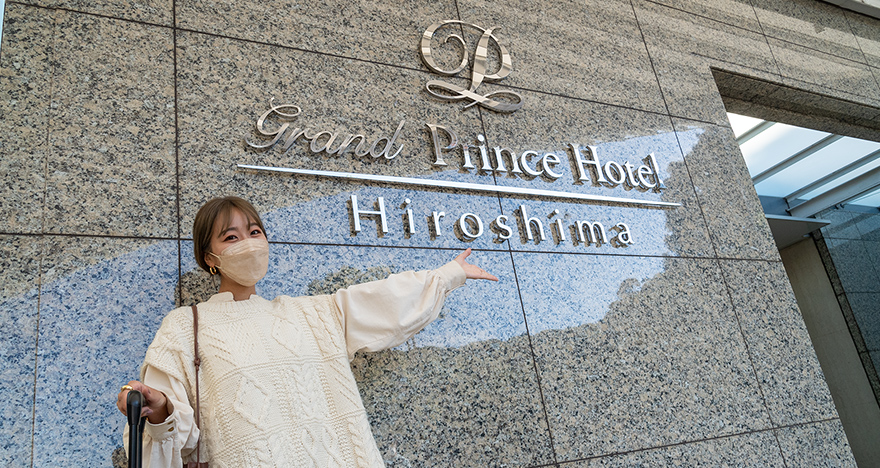 Arriving in style after a 30-minute bus ride. Her bags are held at the hotel’s front desk until the 2:00 p.m. check-in time.

Enjoying access to the first-floor lounge,
Ayumi gets some work done. 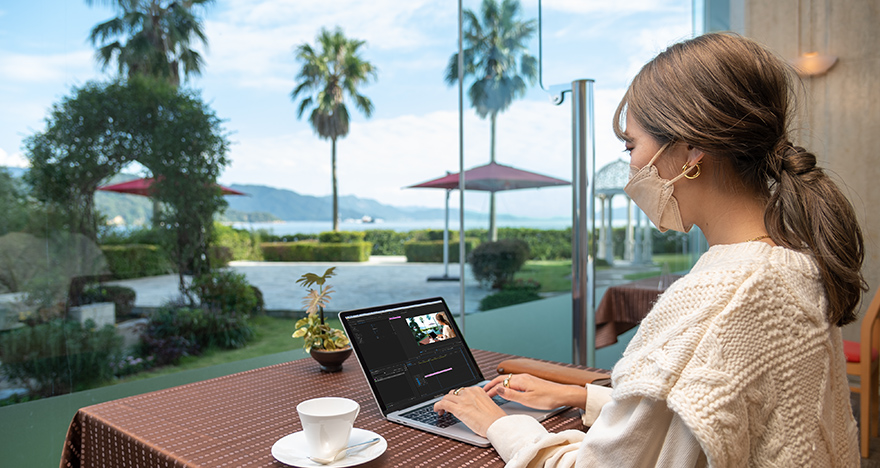 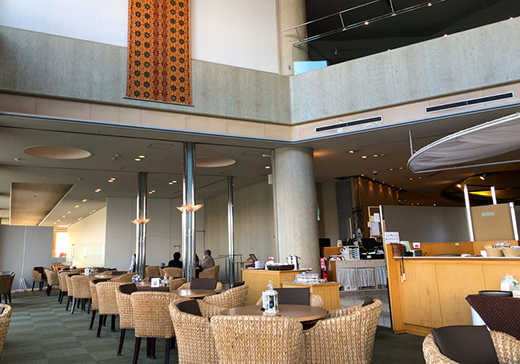 Ayumi checks in at 2:00 p.m. sharp.
She wastes no time in continuing her work in the guestroom. 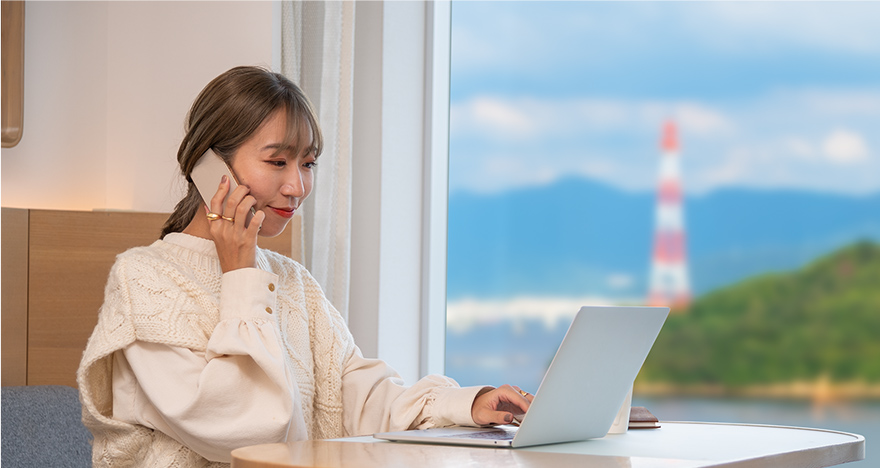 Finishing the job early,
she decides to take advantage of the hotel facilities. 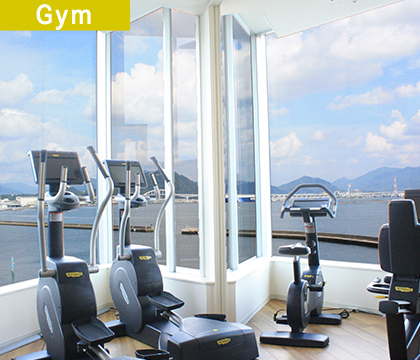 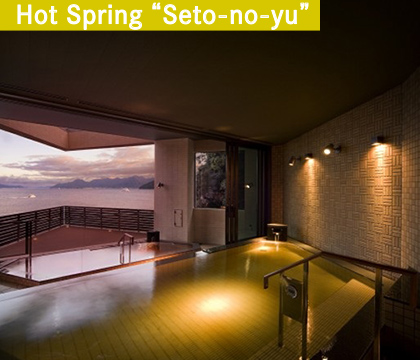 Recommendations also include a brief walk to the harbor.
And there, a spectacular view of the setting sun. 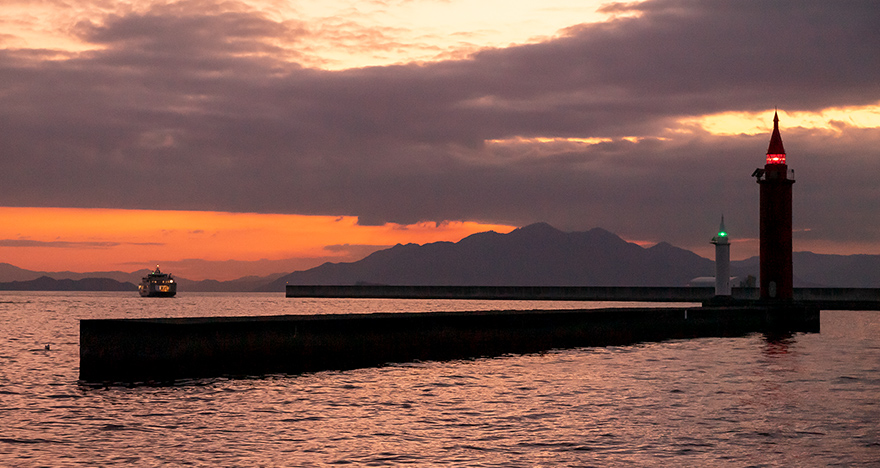 You can enjoy dinner at the hotel restaurant. 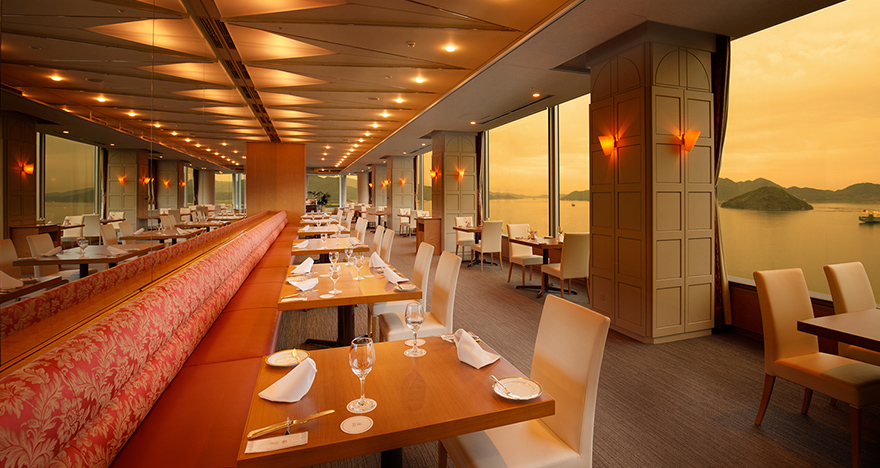 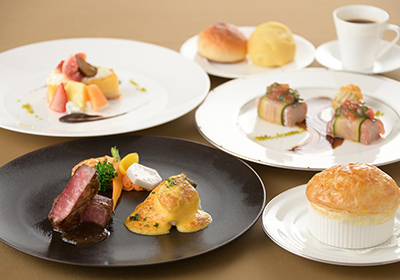 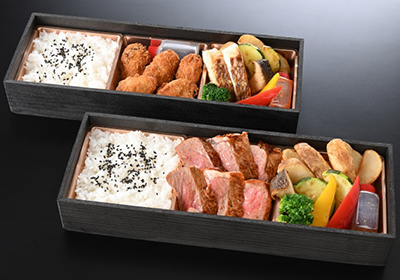 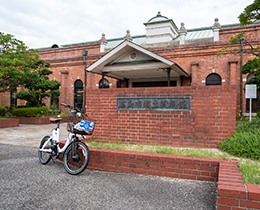 The general theme of this museum is the history and lifestyles of people in Hiroshima City. This nostalgic western-style redbrick structure was originally one part of a canning factory built by the Japanese military in 1911. As a showcase of the outstanding architectural techniques and design perfected during the Meiji era of Japanese history (1868-1912), it has been designated an “important tangible cultural property” of Hiroshima City. 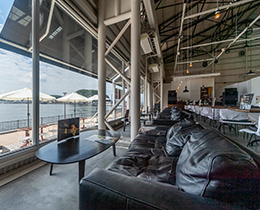 This cafe is located in the Ujina warehouse district – an area known as UJINA-DEP-PURTO-PIA. All seats have ocean views, and you relax there over a cup of fresh coffee. Besides their distinctive home roasted coffee bean blends, the cafe also specializes in selected lunch dishes, dinners and other dining pleasures. 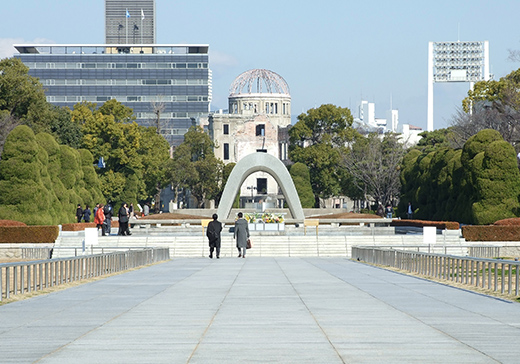 This expansive park, channeling prayers for world peace, was built at a location close to ground zero of the atomic blast that destroyed most of Hiroshima City on August 6, 1945. The grounds contain the Hiroshima Peace Memorial Museum (recreating images of the city at the time of the bombing); The Atomic Bomb Dome (registered as a World Heritage Site); the Memorial Cenotaph to the A-Bomb Dead; Hiroshima National Peace Memorial Hall for the Atomic Bomb Victims; International Conference Center Hiroshima and other facilities. 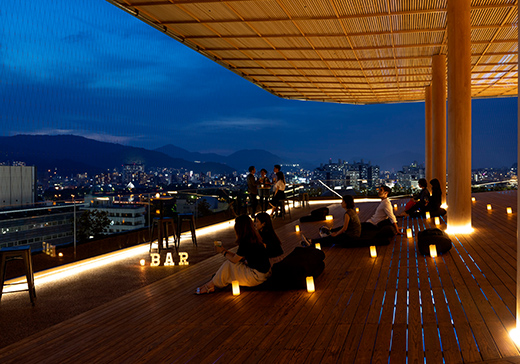 This tower, named after the custom of folding origami paper cranes, stands at the east side of The Atomic Bomb Dome. Depicting transitions from before and after the bombing to the current cityscape of Hiroshima, the exhibits here keenly convey the wishes and importance associated with global peace. The observation deck provides views of both the Peace Memorial Park and The Atomic Bomb Dome (Hiroshima’s two World Heritage Sites). On sunny days, the vista extends all the way to Mt. Misen on Miyajima Island. Another feature is the Orizuru Wall, where visitors from around the world may leave their own folded paper cranes (origami tsuru = orizuru) as symbols and prayers for peace.

Shopping and Dining at Hiroshima Station “ekie”
The ekie is a building complex
where shops furnish rich collections of Hiroshima specialties,
along with dining venues and other enjoyable offerings.

Ayumi's schedule today calls for a cruise
around the many scenic islands of the Seto Inland Sea.
She boards the SEA SPICA vessel from the pier in front of the hotel. 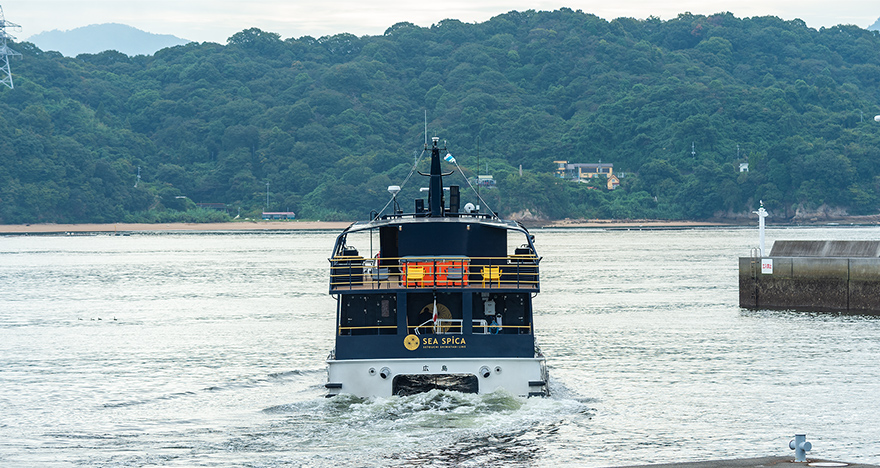 Passengers bask in the island beauty of the Seto Inland Sea,
on their way to the voyage's final destination of Mihara.

There are also numerous appealing locations
where the vessel makes port along the way for sightseeing. 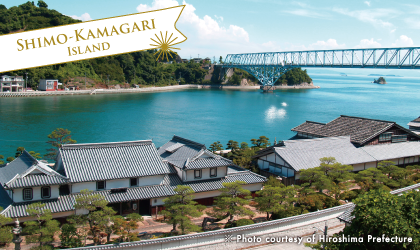 * All photographs are for illustrative purposes only.
* This shooting was conducted in thorough compliance with contagious disease prevention measures detailed in the “Basic Policy for Novel Coronavirus (COVID-19) Control” issued by the Japanese Government.
* Request: When cycling, be sure to travel safely, while observing all rules and manners. For example, please refrain from using smartphones or other mobile devices without stopping along the way. 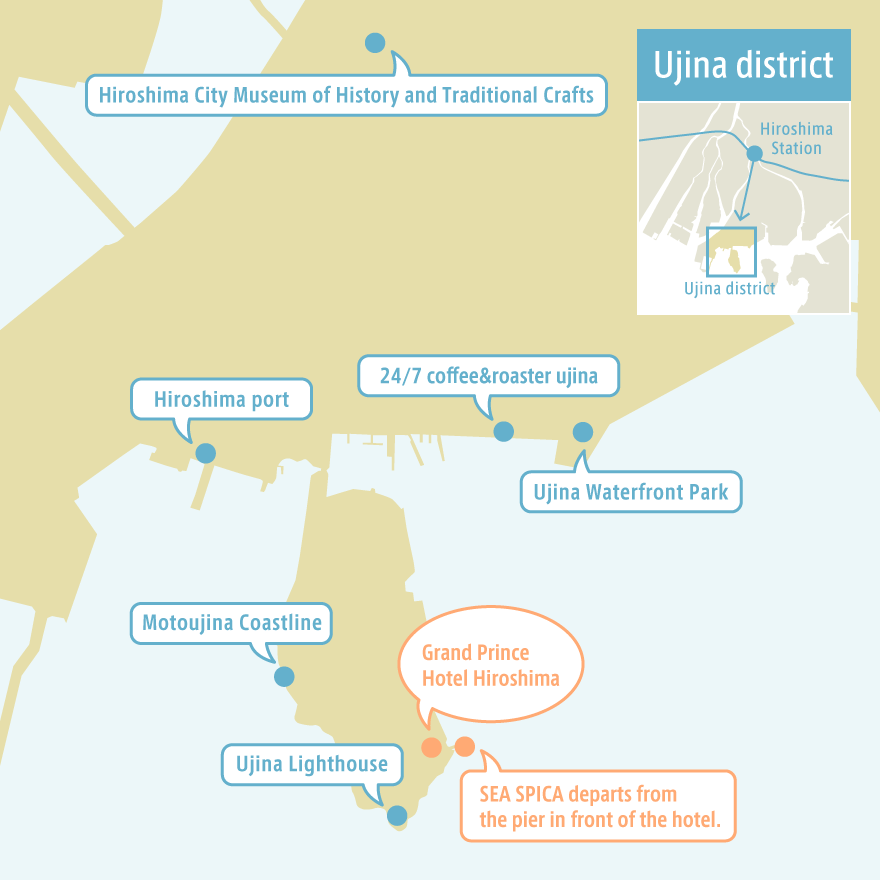 Click here for further details on Setouchi Workation(Japanese Only). Ayumi’s first trip on her own was an around-the-world excursion! Today, she is well known for her blog on social media, which is accompanied by photos, video clips and other means of conveying the joys and fascination of travel. Her specific activities include sightseeing PR, travel agent tour planning, talk show appearances, publishing of related articles and other contributions. Ayumi currently enjoys more than 140,000 followers on her online postings. 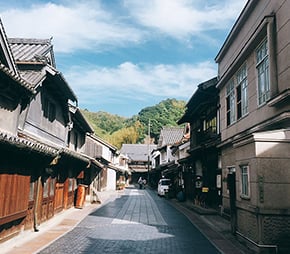 Historical landmarks were renovated,
transforming the town of Takehara
into a hotel.